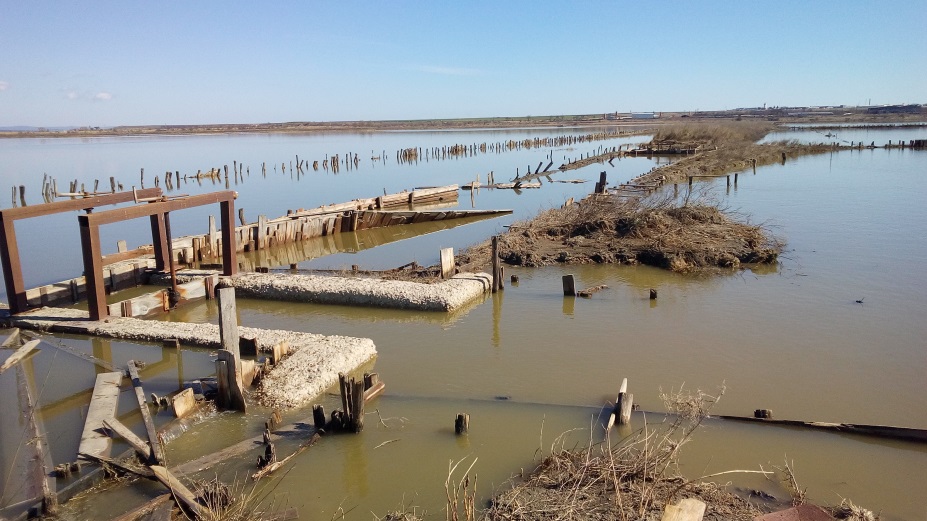 The Atanasovsko Lake is a super-saline coastal water body resembling a firth in the north and lagoon in the south. This explains the variety of habitats there. According to the hierarchical CORINE rating, these habitats are of three main types and several sub-types. The European Habitats Directive 92/43/ЕЕС develops further and completes this classification. It defines 6 habitats in the Atanasovsko Lake, three of which are of priority and in need of special protection. The most rare and best represented habitat is the coastal lagoon. It occupies around 20% of the lake area. The current status of this habitat is favourable but modernised the salt production or some other activities change it to critically endangered very rapidly.

There are several threats to the habitats in the Atanasovsko Lake and, in particular, the coastal lagoon. The largest threat is that of direct habitat alteration or destruction. This may result from salt pan modernisation or inconsistent economic activities such as replacement or destruction of old dykes. Large, tall and wide soil dykes are constructed for salt production. These become overgrown with vegetation very quickly and are, therefore, unsuitable for nesting by species such as the avocet, the black-winged stilt the Kentish plover, the common tern and the little tern which inhabit the coastal lagoon. Studies have shown that these species prefer nesting on low dams boarded with planks. The sudden raising of the water level in some pools early in the summer and their emptying during the autumn is not always consistent with the needs of the nesting and feeding birds.

With its location in the town, the Atanasovsko Lake is subject to strong anthropogenic pressure. Frequently people go along the dykes in order to collect brine shrimp eggs, look for marsh worms, walk a pet or go to the pools of curative lye. This disturbs the inhabitants of the lagoon. Very often, the outlying pools and the channel are polluted with domestic and construction waste. Pollution of the water in the channel around the lake is a hazard both to the inhabitants of the lake and to the coastal lagoon habitat.

The complex of various habitats in the Atanasovsko Lake attracts a vast diversity of birds. The coastal lagoon is of exclusive significance for several species of narrow adaptation and specialization, as well as for the migration and wintering of a significant number of birds. All these birds are threatened by the large number of predators freely entering the lagoon. Stray dogs, foxes and jackals roam freely along the dykes and destroy entire plover and common tern colonies.

The inhabitants of the coastal lagoon are endangered not only within the reserve, but also around it. Hunting is practiced around the protected area during the winter, causing additional disturbance of the birds. Thousands of white-fronted, greylag and red-breasted geese winter every year in the lake. This species is globally endangered but becomes prey to hunters from time to time. There are several trunk-line pylons around the Atanasovsko Lake. They cross its northern and, also, its southern parts. These electricity transmission facilities cause the death of many migrants such as white storks and pelicans during seasonal migration, mainly in the autumn. Several wind-farm and photovoltaic plant projects have been proposed for construction in the area north of the lake, further threatening the birds. The relatively dense network of trunk-line pylons impacts also the landscape and the aesthetic properties of the area around the reserve. Furthermore, other projects for construction around the lagoon exist, which will increase urbanisation in this locality even more.