Lagoons around the world

The word lagoon is of Italian origin 'laguna', and was used to designate the water around Venice. The word entered the English language as early as 1612 and was anglicized into 'lagune' in 1673.

Lagoons are shallow coastal pools, which are fully or partially separated by the sea by a sand bar or by embankments along the coast. They may be linked to the sea by a narrow stream. Their salinity is different from that of the sea or the ocean and may vary between light and super saline depending on precipitation, evaporation, mixing with salt water during storms, which explains the different organisms inhabiting them.

Coastal lagoons exist on all continents. Their numbers decrease further away from the equator. Lagoons occupy approximately 13% of the global coastal areas. On average, they are 1-3 m deep, rarely exceeding 5 m. Lagoons always form around slightly sloping coasts which makes them highly dependent on the sea level. Usually located at water level height, lagoons are highly vulnerable to even the slightest change in water level. Subsiding water may leave them completely dry, while raising water may destroy their separating barrier and flood them.

Geologically, coastal lagoons are young and dynamic systems. They have formed as a result of water levels raising mainly during the Holocene.

Lagoons exhibit a broad spectrum of geographic and ecological variations. There are three main types, defined by the manner of connection to the sea/ocean: 5 lagoon subtypes have been identified in England by their physical geography:

Atolls are lagoons where growing coral reefs have separated a part of the ocean and act as a barrier. They are a frequent occurrence in the tropical water of the Pacific and the Indian oceans. Unlike coastal lagoons, atoll lagoons are more than 20 m deep in some parts. Sometimes coral reefs from around volcanic islands. The island has been sinking over millions of years, but the coral ring around it remains. The reef becomes an atoll protecting an enclosed lagoon in the place of the volcano.

Frequently, the colour of the water in the atolls is a striking light-blue, which is caused by limestone showing through the shallow water. Limestone builds the billion coral exoskeletons creating the coral reefs.

An enclosed bay in the Adriatic sea, in which the town of Venice is located. It is most likely that the Venetian word lacus, meaning lake, is behind the international word for an enclosed bay with saline water. The Venetian lagoon covers an area of 550 sq.m. and is the largest wetland in the Mediterranean basin. It has formed 6-7 thousand years ago when the sea subsided. Today, it comprises 8% of dry land, which includes Venice and many small islands, 11% of permanently water-logged areas or channels, and 80% of muddy shallows which become exposed during receding tides, and salty marshes. 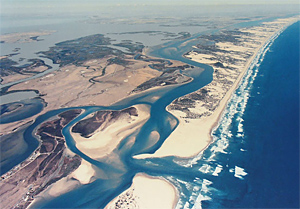 Coorong is a shallow lagoon in Southern Australia, along the coastline. A field of 50 m high dunes separates it from the ocean. The lagoon covers an area of 260 sq. m. Its maximal depth is, on average, 1.8 m during the summer, but increases by approximately 1 meter during the winter. The lagoon is located in a desert area where evaporation exceeds the inflow of water and causes supersalinity. The salinity in the southernmost part of the lagoon is as high as 200 ‰, which allows survival of very few plant and animal species. 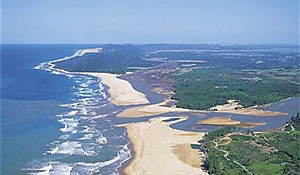 Lake St. Lucia in South Africa is a lagoon in a semi-desert region. A massive 180 m high coastal barrier separates it from the Indian Ocean. The water surface in the lagoon covers 312 sq.km and increases to 417 sq.km. during the rainy season. The water level increases by 1 m during this period. On average, the lagoon is less than 2 m deep. Its connection to the ocean is a 20 km long channel. The largest threat to the lagoon is sedimentation caused mainly by human activity. The lagoon area has decreased during the past 5000 years by 66%, and sedimentation has decreased its water volume by 95%.

Lagoa dos Patos in South Brasil is one of the world's largest lagoon, with an area of 10,360 sq.km. It connects to the Atlantic Ocean via a 20 km long and 9.5 to 3 km wide channel. The lagoon is 5 m deep. Part of this lagoon resembles a fresh-water estuary. Wind is the main factor controlling circulation and dispersion in the region. Northerly winds make the entire system a fresh-water system. Sustained southerly winds make the water brackish.